Explore language while learning about critters. 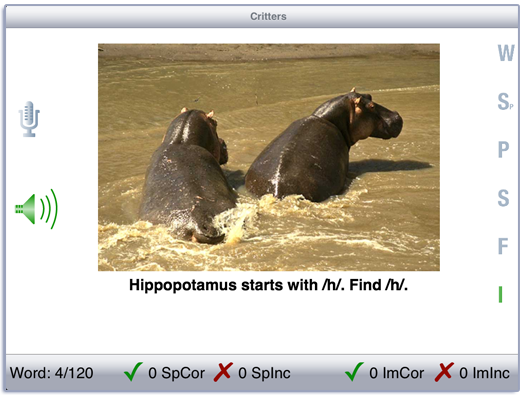 Parents will find “Critters” to be a fun way to teach children new vocabulary, ask and answer questions, and practice great articulation.

Listen to the word by tapping on the Word button or on the picture, then use the record button to record your voice.

The Parentese button will provide a model that a parent might use with a very young child. For a longer model the child can tap on the descriptive buttons–Phrase, Sentence, or Functional Sentence.

Use the app as a starting point for a discussion with the child. Talk about real animals in the child’s environment that are similar to the ones on the app. Talk about what is the same and what is different between the picture and the real animal. Ask the child to draw and/or color a picture of the animal. Print the pictures and make a vocabulary book. Have the child play “charades” by gesturing the animal. Older children might be able to name other words that start with the same sound as the target word. The communication partner can select several pictures from each group and ask the child to categorize them by habitat as they play on the screen.

This app is based on the Wild, Woolly, Wonderful Critters game from LocuTour’s Basic Words for Children CD.