Phonology for your Spanish speaking clients. 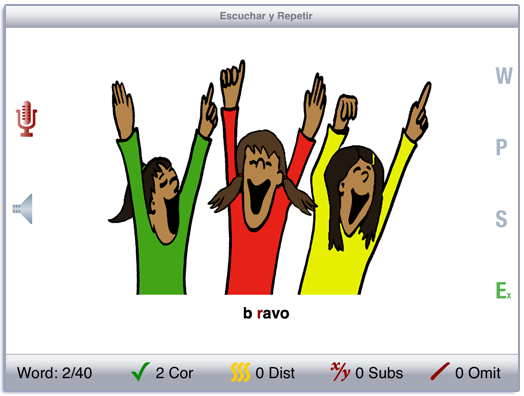 This app uses a phonological approach to remediating speech that is adapted from the ideas of Hodson and Paden and based on the unique features of the Spanish Phonological System.

The phonological patterns included in this app were selected as a result of careful consideration of information from four primary sources: (1) the available literature on phonological development in various Spanish-speaking populations (Goldstein, 1995); (2) our own clinical experience as well as that of our students and colleagues who have worked with many Spanish-speaking children with speech delays; (3) the characteristics of the Spanish language itself, in terms of the frequency of occurrence of sounds and patterns; and (4) the recent recommendations of experts in the field regarding the selection of intervention targets when working with bilingual children (Yavas & Goldstein, 1998).

The cumulative information from each of these four sources led to the inclusion of five broad categories of phonological patterns as well as eighteen subcategories on the Spanish Phonology CD: Consonant Sequences, Liquid Singletons, Postvocalic Consonant Singletons, Prevocalic Consonant Singletons. Four of these categories are included in this app—syllables are omitted. The skilled professional will be able to choose from these patterns to design an instructional program that is tailored to the needs of each child.