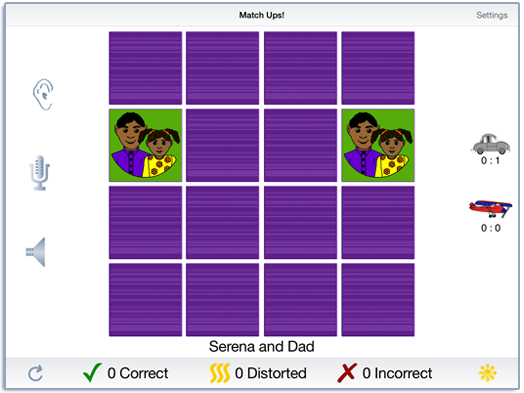 Match Ups! is one of our favorite games of all time. We like it so much that that we’ve put it on lots of our CDs. The first version of Match Ups! was added to our Attention and Memory: Volume I CD around 1996. It is primarily a memory exercise, a visual scanning task, and just for fun. But it can also be used as an aphasia exercise, for speech articulation practice, and to develop a fund of knowledge. SLPs tell us that they often use it as a reward at the end of a session.

You can control many aspects of the game in the Options tab and pick from lots of different cards in the Cards tab. Three features are available on the main screen. If you need a hint, you can turn all of the cards over by tapping the circle with an arrow at the bottom left side of the screen. It will turn to a card back when the cards are face up. Tap it again to turn them back over and continue playing. You can also see a label for the card by tapping the sunburst at the bottom right hand side of the screen. Text will display below the cards that describes the picture, e.g. “red square“, “lion”, “Dusty and Jack”. You can also listen to the description by tapping on the ear at the top or side of the screen. You can pick from an English or Spanish language voice in the options. If the voice is in Spanish, the text will be as well.

Score the child’s speech production using the Correct, Distorted, and Incorrect buttons at the bottom of the screen. If the word was pronounced correctly, tap the green check. If the pronunciation was distorted, tap the wavy yellow lines. If a sound was incorrect for the target sound, tap the red x button. You can record and score as many times as you wish on each screen.

For very young children, individuals with severe cognitive impairment, or individuals with visual perception deficits, the game can be played with all of the cards turned face up in the learning mode. Tap the Play as Visual Perception Task to enable this option. Game play is the same as with the regular game except that when a card is tapped, a green outline appears behind the card. When the next card is tapped a green outline appears behind it as well. If they match, they disappear. If not, the outlines go away.

The Results tab shows the results for the day. The first line has the name of the card deck. Then there is a table where the number of matched and missed are shown (M:M) as well as Correct, Distorted, and Incorrect pronunciations. The results page also displays the number of cards and the number of hints—the number of times the cards were turned face up.

This task is intended for clients in Rancho Levels VII and above. This is a task of psychomotor performance relatively unaffected by intellectual ability, long-term memory functioning, or previous learning. It requires motor persistence; sustained visual attention and scanning; visuomotor coordination; and the ability to encode and recall the symbols. (Lezak 1985) It is designed to utilize Luria’s (1973) third functional unit; planning and verification of activity.

Created by John Scarry, MA. Graphics are by Nancy Scarry. African Animals photos by Sam Larkin. Animals Photos by Corel and Nancy Scarry. A few of the animal drawings are based on originals by Marianne Lee. 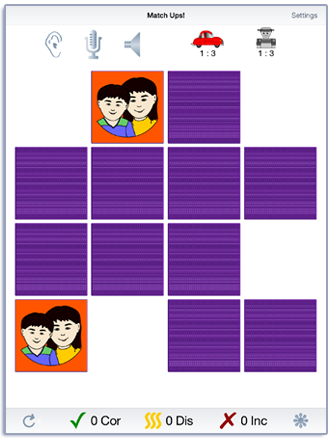 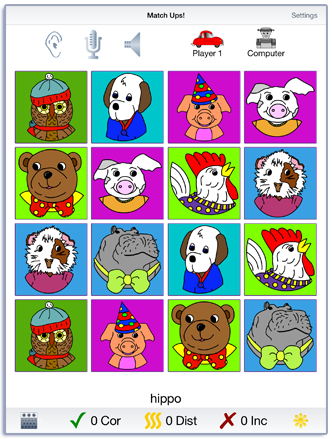 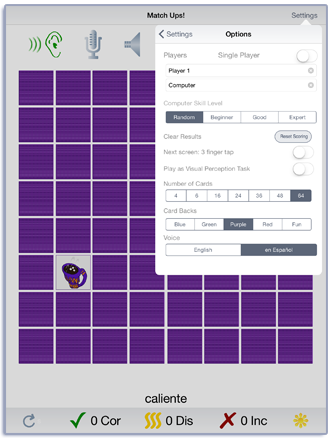 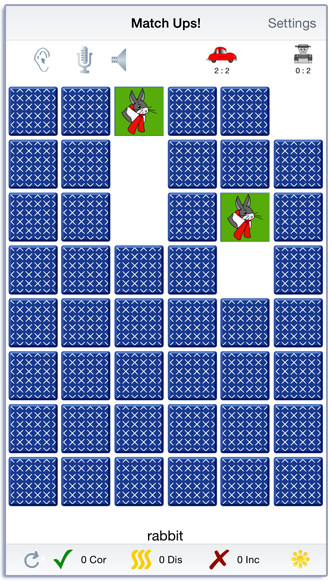 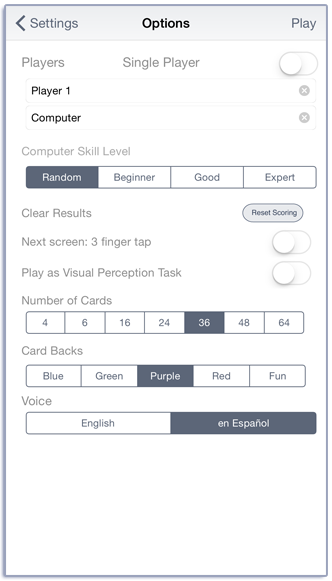 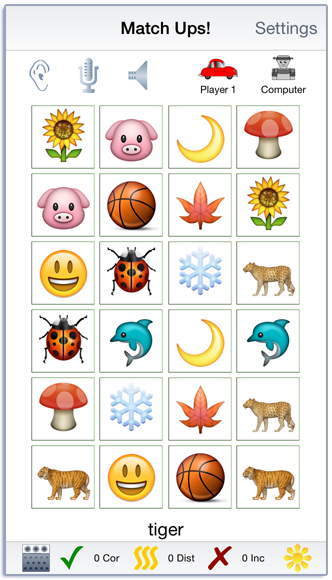