All of the building blocks for successful reading and spelling! 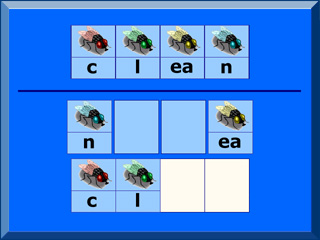 If you have been anywhere near education for the last ten years you’ll know that there has been a pendulum swinging to and fro. I was trained in the late 70’s and early 80’s when anything “Auditory Processing” was played down and “Language” was the buzz word of the time. Twenty years later we’re back to “Auditory Processing” and “Phonemic Awareness”. This time, I hope, we will look closely at the research of Tallal, Leiberman, and others and apply this knowledge of the brain to how we help our students.

I believe that we learn to read one sound at a time. There must be a solid foundation in the sound to symbol associations. In order to establish this foundation I want each student to watch the videos. I know many will say that they don’t need this part, that they already know their sounds, and that it is baby stuff. In many ways they are right. They do know most of their sounds and it is baby stuff. Babies watch mouths very closely to try to pick up on sounds and mouth movements. Many poor readers have a history of chronic otitis media (ear infections) and allergies. This has resulted in fluctuating hearing loss in the years when the auditory processing part of the brain was developing. A dyslexic individual’s brain did not have a chance to develop the ability to segment sounds, blend them together, identify which sounds were the same which ones different, count individual sounds, notice when sounds were added, omitted, substituted or duplicated. Because these processes were not developed naturally in the early years, for reasons of genetics or environment, they need to be developed at a conscious level before literacy can be achieved. It is not as difficult as one might think. I have tried to set up a plan that will help train the brain to process speech sounds. 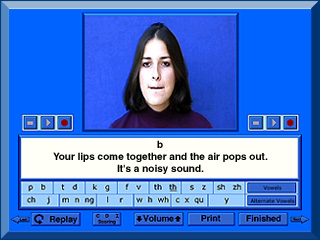 The videos in Read My Lips demonstrate the mouth movements necessary to make letter sounds. Students are introduced to sound-symbol correlation with a series of videos and photos showing the production of each phoneme.

Select the video or photo demonstrations for the sounds your students need most. Students can use a mirror to watch their mouth movements and compare them to the videos or photos. 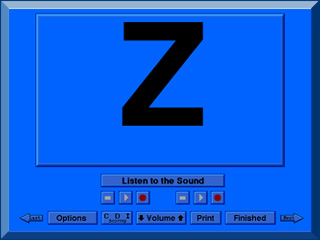 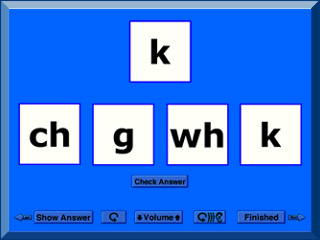 Put Same with Same reinforces sound-symbol relationships. Students find the matching letters after auditory and visual models have been presented. Presentation of stimuli can be auditory only, visual only, or both. Choose to fade the target slowly or quickly for improved speed of visual processing.

There is an optional auditory reward for a correct answer. Put Same with Same involves the students by having them look at the letter, say the sound, then place the card on top of the identical card. Check out the options page to make this game more challenging by removing the card quickly or changing fonts. 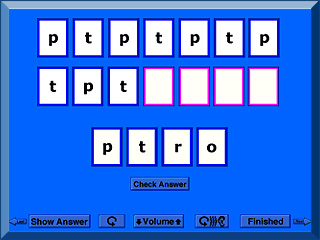 Patterns presents sound-symbol correlation of both vowels and consonants by asking students to complete sequential patterns of increasing complexity. The interactive nature of the game keeps students focused and involved in getting information into their brains.

Patterns provides an opportunity for auditory bombardment and sound/symbol association. The student sees and hears the sound over and over. Repetition improves learning. There are 225 patterns. 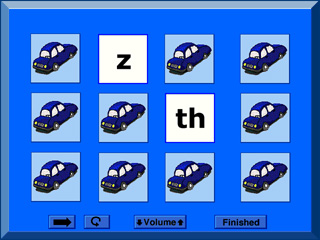 Match Ups! Consonants and Vowels is a concentration game in which students practice sound to symbol correlation. An options page allows the user to choose the auditory and/or visual stimulus presented when the card is turned over.

This intriguing game helps promote verbal rehearsal to recall consonants and vowels. It will most likely be a favorite game. I usually let children play this game long after they seem to need it. This of course would be my perception of “need it.” In fact, children will choose games that still challenge them even though they get all the answers right. This is a very important concept for an educator or parent to understand. If children don’t think there is enough challenge in the game, they won’t play the game. If they think it’s too hard, they won’t play the game. Trust their judgment. 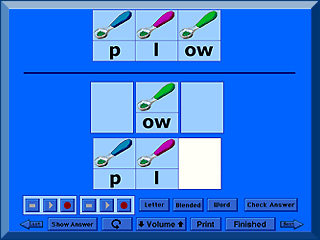 Cut Ups! teaches sounds in sequence. Students listen to a word, determine which sounds are made by each letter, then arrange the game pieces in the correct order. Choose syllable shapes from simple, CV and VC, through complex, CCV and VCC, to very complex, CCCVCC.

Cut Ups! is one of our most clever games. The purpose of this game is to practice sound segmentation. The student must understand the concept that words are like puzzles. There are pieces to the puzzle. Each piece must go into the puzzle at a certain place. When the puzzle pieces are in order, the puzzle looks like a picture and can be seen as a “whole” picture.

Parts make up the whole. In the beginning, make sure the student goes through the entire process of listening to a sound, finding the letter that corresponds, then when the word is complete, playing the Sounds, Blended and Word buttons. This will reinforce segmenting and blending and reduce impulsivity. The goal is not to see how many of the words a student can plow through. The goal is to really understand the idea of breaking words into sounds and blending them back together again. There are 240 words to practice.

Use the options to make this an appropriate game for many students. The options allow you to display the letters only or even the sounds only and no letters for improved auditory memory.

And a One, Two, Three 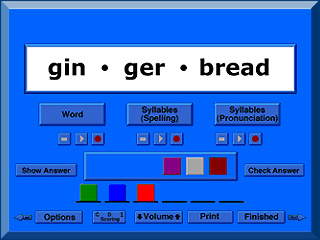 And a One, Two, Three helps develop phonemic awareness of syllables in words and short phrases. Students break down large words into small units to aid with decoding. There are 240 one to six syllable words to provide ample opportunity for practice. Both children and adults enjoy dragging down one colored block for each syllable.

And a One, Two, Three is based on the concept of syllable segmentation. Do you remember hearing a foreign language for the first time? Most likely all you heard was, “Laladeedudum.” There seemed to be no spaces between the words! Everything ran together. You couldn’t tell when one word stopped and another began. As you studied the language you could start to hear pauses that you swore weren’t there before. Your ear was being trained to listen to the sounds. Now the interesting part is that there doesn’t seem to be a one to one correspondence between the ends of words and a pause.

For example, in that last sentence there is a phrase, “and a pause.” Our eyes see three words, but our ears hear, “andapause.” Written language is the process of assigning symbols to what we hear. The rules are rather fuzzy here. We hear “andapause” but we write “and a pause.” If we are ever going to be able to spell, we will have to learn to break phrases and words to smaller units. In this game, we break them into syllables. The syllable breaks are idiosyncratic as well. I tried to consistently break the words into what I thought would be natural sounding speech for a native speaker. This creates a problem. The syllable breaks don’t necessarily match the dictionary breaks. They do however, match the way most English speakers speak. If you are learning English as a second language or are just having trouble acquiring English you can model your speech after my model. Choose the “Pronunciation” model on the options page. You will probably sound more “natural” than if I had adhered to the dictionary syllable breaks. If you are working on spelling and natural speech pronunciation is not the target, use the default “Spelling” version.

Back to And a One, Two, Three. Have the student say the word, listen to the syllable breaks, then move the colored squares to the line. After they are successful, make the task harder. Don’t listen right away to the Syllable button. Have the student count the vowels. Every syllable must have at least one vowel. You will get into the problem of the silent e and the two vowels that go walking, but teach these as still one vowel sound. Have them say what they think are the syllables, then check their thinking with the Syllable button. Use colored felts to represent each syllable. There are 240 words to practice.