Based on the Spanish Phonological System 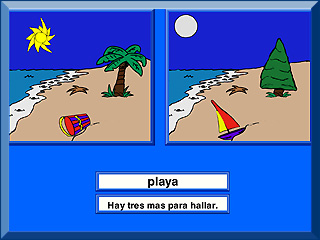 Spanish Phonology: Intervention. These exercises are intended to be a practical resource for the Speech-Language Pathologist working with bilingual or monolingual Spanish speaking children with phonological delay.

Appearances can be Deceiving (Windows)

Each language is unique in its phonemic composition and phonological rules. Therefore, it is important to assess and remediate in the primary language. Clients develop receptive and expressive reading readiness skills and improve speech production with the various levels of patterning exercises.

Speech-Language Pathologists are responsible for providing appropriate services to Spanish-speaking children with speech and language delays in unprecedented numbers. Unfortunately, effective treatment of this population is hampered by a fundamental lack of appropriate clinical resources. In addition, there are few bilingual clinical professionals relative to the increasing demand for their services. Spanish Phonology: Intervention (SPI) was developed as a first step in filling this tremendous need for comprehensive intervention programs for Spanish-speaking children with phonological delays. An important benefit of the computer-interactive format of the SPI program is that it provides a means for the monolingual Speech-Language Pathologist to both plan and monitor phonological treatment for her bilingual clients. With the SPI CD, the consistent quality of phonological input can be maintained across a variety of practice partners, including Spanish-speaking paraprofessionals and family members. 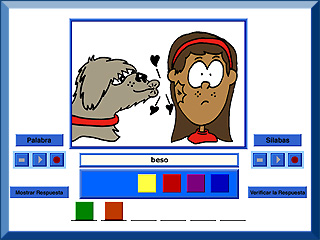 And a One, Two, Three! is a syllable segmentation game and is an important process that must be mastered by Spanish speakers. This exercise practices syllable segmentation and syllable blending for one to four syllables. Segment real words such as, pez, pollo, nido, payaso, comida, elefante, and calabaza. 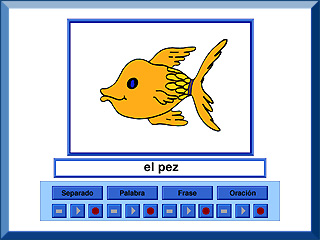 This task is the basis for phonology therapy. It includes the often necessary step of separating the target sound from the rest of the word. In this way, the error sound can be eliminated from the habitual motor sequence. While playing Escuchar y Repetir (Word Practice), the child must process auditory information at the sound, syllable, phrase, and sentence levels with imitative or spontaneous expressive phonological production. 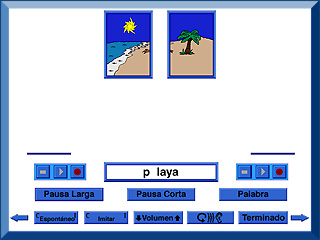 Word Blending separates the target pattern from the rest of the word, then models the sound blending.

Children with phonological deficits have often developed strong motor patterns that need to be broken before they can form new, correct patterns. One way to break these old motor habits is to separate the target sound from the rest of the word. This allows children to produce the target sound without interference from the rest of the word, and the pause breaks the automatic motor sequence. Once they have practiced the target word without the production of the error sound, they are ready to either replace the error sound with the correct one, or add a sound previously omitted in a connected word. 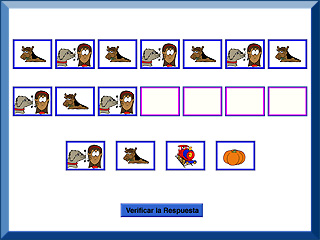 Patterns is a fun way to work on auditory bombardment. Clients listen to patterns presented on screen and then continue the pattern with the remaining cards. Options allow the clinician to select visual, auditory, or both visual and auditory cues; and adjust fade times.

Hodson and Paden advocate the use of repeated presentations of words containing the target sounds at a low level of amplification. This procedure has improved awareness of sound patterns in phonologically impaired children.

The Phonological Production option: The child will practice selected phonological targets in the context of a patterning game. With this activity, the clinician selects the Solo Visual (Visual Only) option from the Opciónes (Options) screen. The child names each picture in the pattern until they come to the blank pink cards. The child then picks up the next card in the sequence, names it, and drops it into the spot where it belongs.

The Auditory Memory and Sequencing option: The child will practice selected phonological targets in the context of a patterning game with the Solo Auditivo (Auditory Only) option selected from the Opciónes (Options) screen. The child listens very carefully to the pattern and touches the empty box that matches each spoken word. The child continues the pattern by picking up the picture that is next in sequence and dropping it in the correct spot. This is an excellent activity for auditory perception, auditory attention, auditory memory, and auditory sequencing.

The Desvanecerse (Fade) option: In this activity, the clinician can choose a speed at which the pictures will disappear from the screen. The clinician uses the Opciónes (Options) screen to select the fade time: Rápido, Regular, Despacio, Nunca (Fade Time: Fast, Regular, Slow, Never). The child will see the pictures and hear their labels, then the pictures will disappear, and the child must remember their order so that they can complete the pattern. This is great for auditory and visual memory.

The fade mode is designed to work visual memory for sequencing and speeded visual picture decoding. Auditory stimuli can be presented concurrently or independently. The default mode of Desvanecerse Nunca (Never Fade) always presents the auditory stimuli. If you want to present just a second or two of auditory stimuli and have the child verbalize the rest of the pattern, click on the screen while a sound is playing during the auditory presentation and the sound will stop. 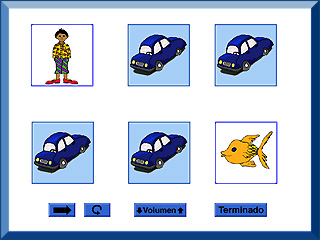 Match Ups! is a fun reward for a good therapy session.

Clients listen to auditory stimuli and practice target words using a verbal rehearsal strategy. To play the game, the client picks a card, hears the picture labeled, imitates the label, and tries to find the matching card. Four difficulty levels (6, 12, 24, and 48 cards).

After being exposed to the sound of the target, the child must have extensive practice in producing the target. Hodson and Paden (1983) emphasize the importance of the client’s saying the target sound or sequence as correctly as possible, so as to reinforce the correct kinesthetic sensations. Our experience has shown that a multi-sensory approach to establishing placement, auditory perception, and kinesthetic feedback on productions has been the most effective approach to improving phonological processing and correct speech production. 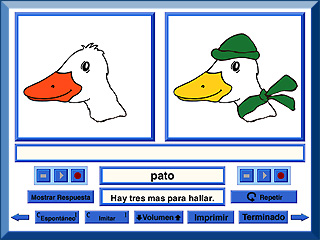 In What’s Different? children practice target patterns in spontaneous speech as you talk about three things that are different between the two pictures.

Although the phonological approach is intended to treat highly unintelligible children and does not necessarily include carryover activities to the sentence level, this game was included for those clinicians who would like to look at transfer of target patterns into spontaneous speech in a structured language situation. We find that this is a fun activity and a good one to include for a complete therapeutic package.