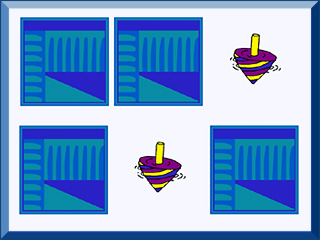 Clients pop bubbles, help a bulldozer do its work, fill a pond with lilypads for a frog, catch fish, grab flying objects as two clowns juggle them, and help a bear locate his honey jars. And all the while they practice their target phonological patterns. 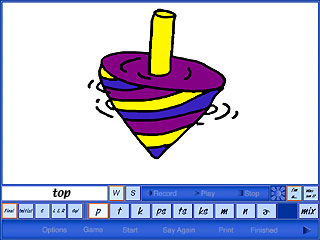 Who Am I? teaches clients the names of all of the pictures on the CD and allows them to practice target patterns in a continuous naming, or RAN (rapid automatic naming) format. 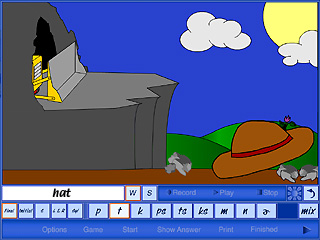 Dozin’ Off encourages speech practice in a heavy machinery context!

When a boulder falls from the mountain, the client clicks on it, and the dozer pushes it off the cliff. When it lands, it turns into a target picture. The client names the picture then clicks on it. The computer names the picture, then the item shrinks and moves off to the side. The client continues to click on boulders until she has named all of the target words. At that point, a bulldozer removes the boulders from the screen and leaves the target pictures in case the clinician wants the client to name them again. Stimulus presentation can be in the form of the whole word or the word with the target sound (or syllables) separated. 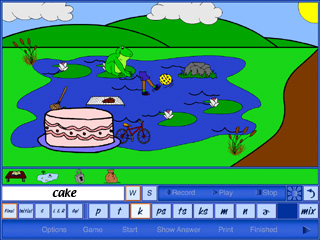 Yumpin’ Yimminy moves the client from the mountain to the frog pond!

Pictures of target words float in a pond. When the client clicks on a picture, it enlarges. The client names the picture and clicks on it again. It shrinks and turns into a lily pad as the computer names it. The frog jumps onto the pad and the pictures line up underneath the pond. When the client has “found” all of the lily pads, the frog hops away and the pictures remain in case the clinician would like the client to name them again. Stimulus presentation can be in the form of the whole word or the word with the target sound (or syllables) separated. 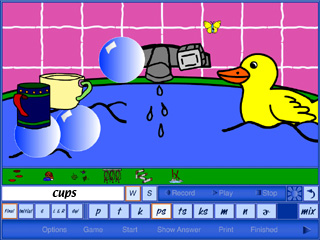 Gone Fishin’ continues the water theme of the last two games but adds fish and a fisherperson!

Using the mouse, the client clicks on the hook and worm and drags the hook to a fish. He clicks on the fish and it turns into a target picture. He names the picture and clicks on it. The fish is reeled up on the line, then escapes, jumps, and swims away. The target picture appears at the bottom of the lake. If the client finds it hard to click and drag on the hook, he can simply click on a fish and it will turn into a target picture. When all the fish have been caught and released, the person in the boat drives into the sunset, the sun disappears, and the sky turns to night. All of the pictures are still available at the bottom of the lake so that the clinician can ask the client to name them again. 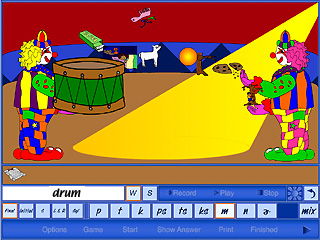 Clownin’ Around takes the client to the circus!

As two clowns juggle target pictures, the client chooses a picture and clicks on it. It enlarges and the client names the picture. She clicks on the picture again, the computer names and shrinks the picture, then it turns into a colored ball. When all of the pictures have been named and turned into balls, the clowns catch the balls and walk out of the ring. The pictures are left in the ring in case the clinician wants to ask the client to name them again. 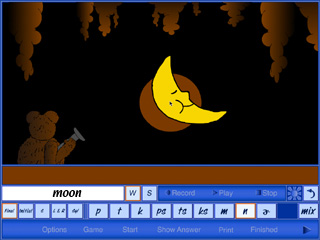 Bear-ly Lit introduces the client to a honey-loving bear! 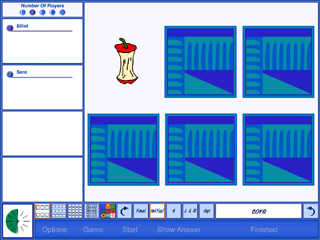 Match Ups! is a great way to end a session--clients love this game!

The client turns over one card by clicking on it with the mouse. The client hears the picture labeled, imitates the label, and tries to find the matching card. When a match is made, the two cards either disappear from the screen after three seconds or remain visible until the client clicks on the next card The client then gets another turn. If two cards do not match, they are turned over when the next player, or the computer, chooses the next card. The client may hear the picture labeled again by clicking on the picture. The client continues to uncover pictures and find matching pairs until all of the matches have been found.